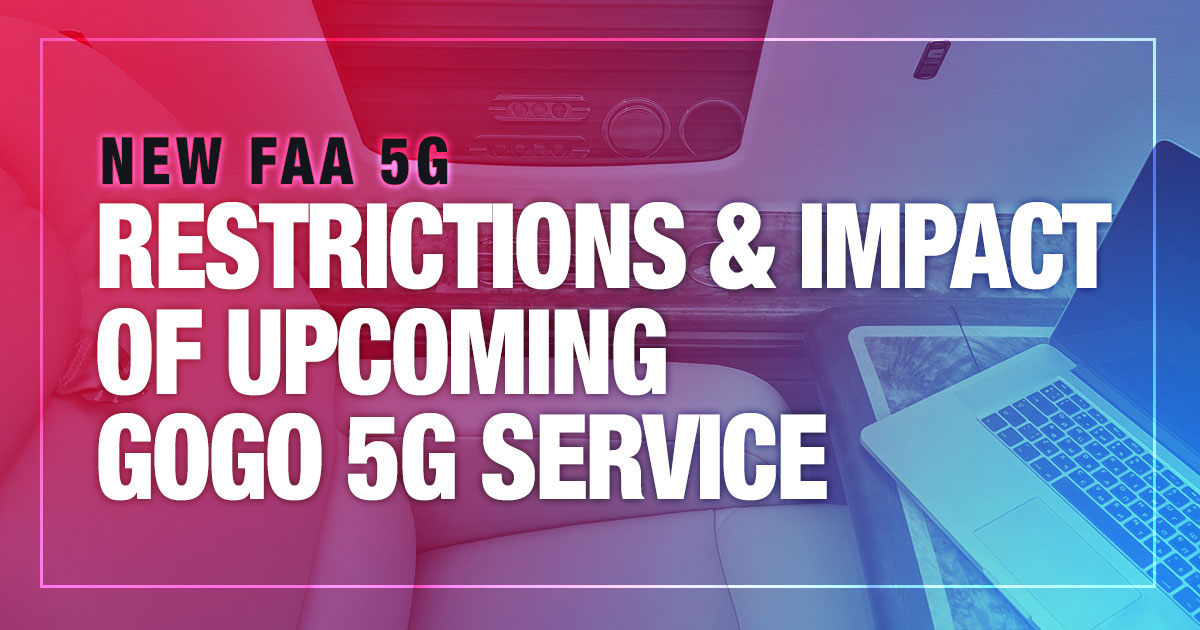 On Tuesday, December 7, 2021, the FAA released a statement regarding wireless carriers’ expansion of 5G on the ground and the potential effects on aviation safety.  The FAA and FCC are currently working together to safely roll out 5G services (now pushed to January 5, 2022) and mitigate potential issues.  These issues include:

While final resolution by the FAA has yet to be determined, this interference issue has operators asking the question:  What does this mean for Gogo Business Aviation’s upcoming 5G deployment?

When Gogo launches 5G in the second half of 2022, it will be the first 5G in-flight network in North America, bringing the faster data rates that the aviation industry has been waiting for.

Great news! There is no issue with Gogo 5G and interference.

The issue is not a 5G technology issue, it is an issue specific to the radio frequencies used to deliver it. In a recent press release, Sergio Aguirre, President of Gogo Business Aviation, stated:

Gogo has never used the frequencies under discussion, nor do we plan to use those frequencies for our 5G network.  The spectrum bands used by Gogo, currently and following the launch of our 5G network, have been in use for decades and have never been shown to interfere with aeronautical services.

Technically speaking, “Gogo plans to use 4 MHz spectrum it owns in the 800 MHz band and additional unlicensed spectrum in the 2.423 GHz – 2.475 GHz range, which has sufficient spacing from the radio [radar] altimeter operating range to preclude any interference by the Gogo 5G system.”

Don’t worry – there will be no aviation interference issues to be concerned with relative to the future of Gogo’s 5G network and onboard system.

Contact one of West Star Aviation’s Avionics Technical Sales Managers below for additional questions or to schedule your Gogo 5G installation during your next event.