Michael has 17 years of aviation experience, 13 of which were spent working with the Gulfstream product line. His aviation career began while serving in the United States Navy as an Aircraft Technician during Operation Iraqi Enduring Freedom. While serving in the Navy, Michael graduated from Florida Jacksonville College’s Aviation Maintenance program and became a licensed A&P technician.

Michael’s career in business aviation began when he worked at Midcoast/Jet Aviation as a Gulfstream technician and crew chief, as well as a technical sales associate. Michael joined West Star Aviation in 2015 working with the Gulfstream team as maintenance lead. He led the first GV 16C/192-month inspection to be performed outside of an OEM facility, and most recently led a GIV wing de-mate and separation project that resulted in a zero defect test flight.

“We are very happy to have Michael as part of our staff at West Star. He has grown tremendously over the last two years and his appointment to TSM is a natural progression of his success within West Star,” said Marty Rhine, Director of Sales, West Star Aviation. “Michael knows the ins and outs of a Gulfstream aircraft and can bring a maintenance mindset to the sales side of business,” Rhine continued. 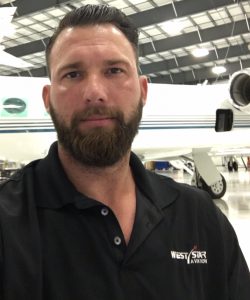